High point of my week: When Hi-5 came down to Sentosa for a meet-and-greet session, and put up a performance for over 400 little children at an amphitheatre just a stone’s throw away from my office, in the middle of which it started to pour, sending aforementioned little children and their assorted parents scrambling for shelter like so many little bugs.

Low point of the week: Two seconds after the evil laughter, when I realized just how low I’ve sunk.

Christians, avert your eyes now! Fow the terror that is Wonder Showzen is here!

Yeah, little girl, you’ll never know what Heaven is if you keep appearing on this show.

You know how to work YouTube – go look for more if this kind of thing intrigues you.

Uh oh. A bit too close for comfort.

I’d always been under the impression that the PAP was somewhat unpopular in the blogosphere. The majority of bloggers seem to admit, if grudgingly, that because they haven’t led Singapore down economic failure they must be doing a relatively good job, but the sentiment is usually tinged with a hint of disapproval. Perhaps it’s the inherent uncoolness of supporting the Big Winners, no matter how terrible the underdogs are.

So when I stumbled upon Ms Toothbrush’s blog-entry, whereupon she lampoons Singaporeans for not being more appreciative of her wonderful country, I was rather surprised. Of course, her argument’s not really very convincing, but given her age I suppose it’s natural. More surprising are that she has fellow PAP-supporters.

Anyone have any more? She’s the only remotely unapolegetically-pro-PAP Singaporean blogger I could find (the rest all have buts, ors and howevers). 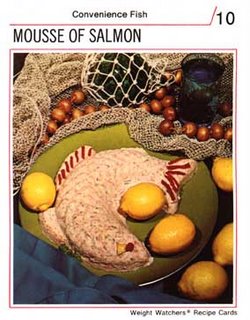 I found this so funny I completed all activities mentioned in this post’s title.

In recent times, I have: 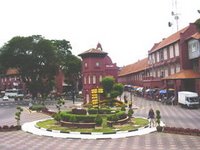 Been to Malacca, which was disappointingly like an older and dirtier Singapore. The curious juxtaposition of anceient European architecture in an Asian city isn’t really very interesting to a Singaporean. Off-season Malacca also showcases the equally not-very-interesting situation of half the shops in town being closed. Having a total of 3 restaurants (unless you counted Pizza Hut) in the entire city to eat at was also rather a sad prospect, which lead to my leaving for Tioman after spending just one night. 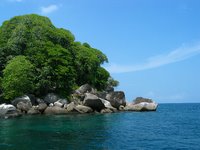 Been to Tioman (as above), which also disappointed, mainly because I’d already been spoilt on Thailand’s Ko Samet. Ended up stuck on one of the more delapidated resorts and eating a lot of fried rice, which for a Singaporean on holiday is something like discovering God and realizing He’s a Britney Spears groupie – disappointing. The water was incredible, though as we had stupidly forgotten to bring sunblock swimming for extended periods looked like a dangerous prospect. The skin on the numerous red, squinting caucasians at the resort bore silent testament to that. Snorkelled a bit, only to discover that fish swimming beside me just freaked me out, and that I have a perfect memory of the soundtrack from Jaws (at least, that one track).

Finished reading To Kill a Mockingbird and Gentle is the Night (see above two entries). The first was wonderful, the second not quite my cup of tea. It felt rather like a teenage love story written by a man for an intended audience of chauvinists.

Tried playing World of Warcraft: The Board Game, and failed completely. Setup alone took an hour with the gang, and we ended up adjourning for some DOTA instead. I should have known that a board game with 20 different types of tokens, 10 different decks of cards and over 200 figurines would be more complicated than Monopoly.

Tried to set up the NUS Science Youth Alumni website, for which I am the webmaster. Three and a half years in NUS as a physics student, and my biggest claim to a scientific background is that I have been webmaster for a bunch of science societies, and in fact still am. If you’re an ex-science student and crave to meet other ex-science students (WHY???!!!) then visit the website here. It’s not much now, hopefully I find the enthusiasm to update at least layout.

Missed the elections. Other bloggers have probably commented on them anyway, so I think that’s enough said on my part.

Moved office location to an ugly container perched dangerously on a precipice overlooking the beach. Now, if employees take a wrong turn coming out to go to the toilet, they plunge several metres down a rocky slope onto the unforgiving concrete road adjoining one of Sentosa’s beaches, possibly to be crushed slowly under the beach tram as it announces serenely to tourists, snapping frantically away at the mishap, that they are at one of Singapore’s most beautiful beaches. I have been assured that the lifeguards know CPR, so that assistance will be readily available in this event.

Felt strangely hostile and antagonistic (more than usual). I am unable to account for this, except perhaps that it is due to the recent high temperatures we’ve been having. Have had to consciously curtail the biting sarcasm in the office, to prevent myself from being flung down dangerous precipice (see above entry on new office location). Colleagues now throw me suspicious glances whenever I speak – sarcastic derision is almost omni-present in my voice, even when I’m just talking about how nice and tasty the food from the canteen that we eat from every single day is, or how nice it is that we’re getting to work in a container, or how grateful I am that they are giving me things to do so that I am not idle because idle-hands-belong-to-the devil don’t they and I sure don’t want to belong to the devil oh no I’d much rather belong to the company that’s to great thank you very much

Been tasked on my return from holiday to oversee an intern. This is possibly one of my more annoying tasks(see above entry), as he is lazy, incompetent and keeps trying to talk to me, decreasing my work efficiency. My boss tells me that this is a test of my management skills, at which point I have to make myself keep very quiet for fear of saying something I will regret at a later point (see above entry on steep slopes). It doesn’t help that the only things I can task the intern with are general administrative chores despite his being a Sports Management student, meaning that if he were in Tioman he’d rather swim-and-be-sunburnt than sit around and read books. The clockwork precision (1645hrs sharp) with which he plagues me with questions on when he can go home and how all his other intern friends in other companies get to go home earlier put my teeth on edge, and no doubt because I am evil management who will not let him go 15 minutes earlier he’s now taken to Medical Leave to get away from work.

Realized with horror that my leadership style resembles that of my chief clerks from the Army, which generally involves much fussing around subordinates (the poor intern), frequent reminders to work hard and making noises of disapproval whenever I hear MSN sounds. It’s natural, of course, since I was in Office Admin and they were my chief examples of leadership (the Unit In-Charge being a Major who mostly sat around with his legs on his table smoking) but I dread the day when I start bullying people into working faster by putting my old, wrinkled bosom dangerously close to their faces and warning them about what happens to bad boys who don’t concentrate on their work.

That more or less wraps things up for now. Come back again later in a couple of days when I feel better, and when I feel up to blogging more often than once every two weeks.

It was nice having you here reading my blog even though I haven’t updated in a while.

It turns out people don’t really like to listen to funeral music. 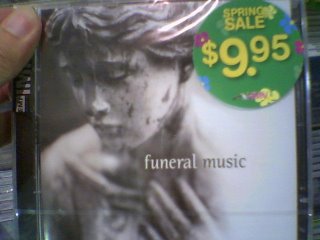