I am a poor friend, I know. I returned from a short trip to Thailand, having visited the City of Angels (Bangkok) in particular but regretfully report that I have returned with nothing to show for my efforts. No, not even the cheap chocolates from the airport when you realize you’ve forgotten to buy something for your friends back at home.

I don’t even have pictures from my trip to show you (though I’m sure some friends will be happier about that).

In any case, blah blah Bangkok was nice blah blah busy city blah blah many cheap goods from designer labels to imitations of designer labels to electronic goods to plastic models of electronic goods blah blah prostitutes blah blah ping pong show blah blah cheap and spicy food blah blah. You can tell it wasn’t too exciting for me – Bangkok is mostly everything everyone says it is, which is a developing city blessed with the trade routes of a thousand commercial pirates. No surprises there, until my last night when we went to watch – the Ping Pong Show.

We’d seen the go-go girls dancing on bars at the night market and been accosted by pimps telling us the goodness of the Ping Pong Show but missed it the first night we were there, but Phillipe insisted it was a “cultural experience” (the culture of prostitution being a historically old one, no doubt) and we went at last. To tell the truth I was more than a little terrified – the zombie-like girls swaying in the open-door bars I’d seen were anything but attractive and the last thing I wanted to see was a show where they did anything with ping pongs. I don’t even particularly like ping pong.

So we walked along the streets of Pat Phong looking at the advertisements proffered by the many different pimps there and at last entered a seedy-looking establishment that boasted the “Best Girls in Bangkok” (see example of a bar below), arriving just in time to see a ping pong ball arc across the room over the heads of some members of the audience. I would like to describe what exactly it was that the woman on stage did, but I lack the vocabulary to describe all the different parts of her anatomy with which she handled that ping pong ball. Mostly because I do not possess said pieces of anatomy and I did not pay too much attention during sexual education, instead choosing to laugh with my friends about how we’d never need to know what the thing was called as long as we knew what to do with it. Innocent as we were, I guess we never expected that quite so many things could be done with it, such as with cigarettes and beer bottles and ribbons. 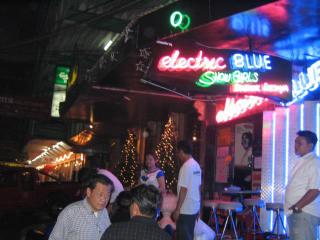 Strangely, in a bar full of prostitutes (they out-numbered the customers), we didn’t manage to attract any. Perhaps we looked a bit too squeeky-clean and young, still possessed of full heads of hair and teeth and not needing accompanying ladies-in-waiting to wipe up our drool after us. Not really potential all-nighter customers (whom I presumed paid a lot more than the hundred baht we spent on cokes). While I sat in my catatonic state, though, a woman who looked old enough to be my mother came over and started massaging me. I would have recoiled in terror and ran, but my legs were weak and I wasn’t quite sure that I could make it to the door in time before I was pinned down by enraged females (in knee length boots) for trying to skip out of paying for my coke. So I tipped her when my bill came, which for some reason provoked her to try to make me kiss her, which I complied with, trembling as I did it as the names of all the STDs I’d learnt about in school ran across my mind in big red marqueeing text. We fled after that.